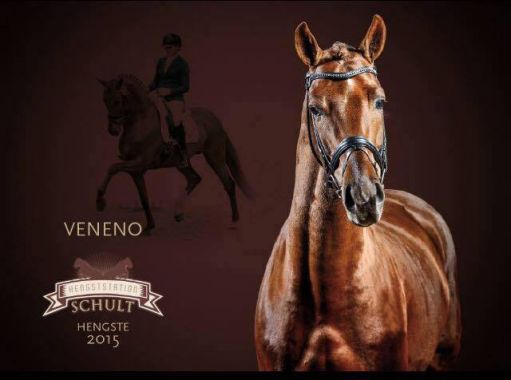 With Veneno we can present you with another stallion that will enrich our stallion collection 2015th
The Westphalian chestnut is the kind of son that causes a sensation and makes his father proud.

His father Vitalis 2009 was reserve champion at his licensing in Münster-Handorf, drew its Beschälerbox the State Stud Warendorf and enjoyed great popularity among breeders. Already with his first first crop of foals made ​​the KWPN stallion clear that he is a sire of special quality.
2012 Vitalis was sold in the US and moved "across the pond". 2013 took the Vivaldi-son under the saddle of Charlotte Jorst (USA) at the World Championships for six year old dressage horses in Verden in part and reached the final.
Vitalis' sons are especially attractive. Veneno has what it takes to also be an important sire, because even on the maternal side his pedigree has much to offer.
Among the successful dressage horses of the parent strain in the S class includes Adrian v. Accent II (until Interm. under
Vanessa Stehl), Bergerac v. Bergamon (up Interm. I under
Ursula Kufner), Bosun v. Bergamon (under Yvonne Tilke),
effect v. Ecuador xx (under Reinhard Schönert), Joy of Jazz v. Jazz (under Christine Kühn), Pandora v. Rivero II (under Jessica Schneeberger) and Rubina v. Rubirando (up Interm. I under Frank Friend). Numerous licensed stallions out of this dam line produced:.. Copperfield v Classiker, Richard the Lionheart by Rubinstein I (up to Grand Prix de Dressage successful and team silver at the European Championships for young dressage riders 2009, Friederike Hahn), Radclife v Rivero II (successful up. S-dressage with Goetz Brinkmann), Sir Caramello v. Sir Donnerhall I, Spirit of the Age OLD v. Stony (international Grand Prix victory by Bernadette Brune).

His mother, St.Pr.St. Diamond Lady (Diamond Hit - gentry - Argentinus - Furioso), previously brought forth seven children and all of them are very successful and promising. Her first offspring was awarded the title of state premium mare and was sold to South Germany. Diamond Ladie's second successor, a black stallion from Dresden Mann, is a highly successful dressage horse in England.