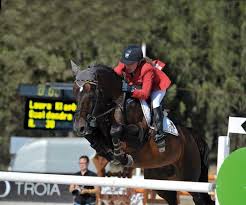 As a "born and raised" product of our station, Qualdandro had an unbelievable career in show jumping, and will now have an equally outstanding career in breeding with his ideal technique and fascinating bascule. Over many years, he was a reliable and ever successful partner with over 10 advanced S Level victories and well over 100 advanced level placings strongly qualifying his rightful place in breeding.

He achieved his greatest success starting in 2008, under Laura Klaphake who played a leading roll with him in international junior sport. With her, Qualdandro won multiple Nations Cups, and in 2009 and 2011 respectively, the silver medals at the German National Championships. They were double clear in the Nations Cup at the 2011 European Championships in Comporta, Portugal where they were the best German pair. They then won the Preis der Besten in Warendorf as well as the Grossen Preise in Morsele and Bonheiden, Belgium. After 2012, the 18 year old Qualdandro won more S Level jumper classes. He jumps out of full elastic force with first class quality.

This talent for the jumping course clearly stems from his pedigree. Qualandro's sire and grandsire belonged to the most successful show jumpers of their generations. Quick Star performed several times true exploits with Meredith Michaels-Beerbaum and won numerous Grand Prixs. His dam competed successfully under the name "Alisa" and had more than 50 victories and placings up to advanced (S) level. Qualandro's dam's sire, Aldatus, was the European Champion of junior riders with Christian Ahlmann and, later, Dutch Champion with Jos Lansink. The granddam is a half sister of the licensed stallion Salido. The "PS-founding stallion" and Gotthard son, Gepard, Lindberg by Der Löwe xx and the legendary jumper maker, Domspatz, round the pedigree perfectly.