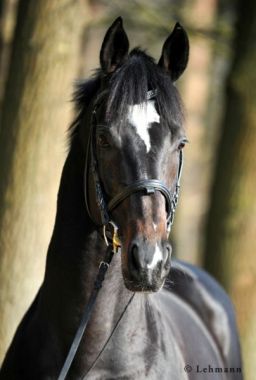 In his seven year long career, Lucarelli xx from the Haus Ittlingen stable, competed in 27 races, won seven of them and placed in five. He was especially successful as long distance racehorse. In 2013, he won the Silberne Band des Rheinlandes in Cologne, a Listed race of 3,000 meters and he was able to place in long distance Group races. His best IC was 103 lbs.
Lucarelli ended his active career in the summer of 2014. He was in the final round of the Schaufenster Vollblut in 2010 and placed fourth as the best active racehorse. Lucarelli xx was licensed at the late licensing of Rhineland and Westphalia in January 2012. In February 2015, he was licensed by the Trakehner Breeding Association and, shortly afterwards, by the Oldenburg Breeding Association as well. 'A highly interesting thoroughbred with a large frame, legs, shoulder and croup, with big eyes and much expression" was the comment of Lars Gehrmann, the Head of Breeding at the Trakehner Breeding Association. He further praised the poised walk and the worldly-wise manner of the dark brown horse.

Lucarelli's dam, Lavorna stood out as a mare very true to type at the Schaufenster Vollblut in Warendorf in 2006. She stems from one of the most successful German mare families. Her grandmother Laurea provided the Derby Champions Lando and Laroche. Lando convinced as champion racehorse with seven international Group 1 victories, among other the Japan Cup, and as father of ten Group 1 Champions.

Lucarelli's sire, elegant and correct High Chaparral xx won six Group 1 races between the age of two and four; among other the Breeders Cup Turf, Group 1 in the USA and as a three year old the British and the Irish Derby, Group 1.
Regarding his mothers side, High Chaparral is a son of Darshaan-mare Kasora, from one of the best mare families by Aga Khan. This cross proved to be extremely successful, providing more than 50 stakes horses. High Chaparral himself is father of 36 Group race winners, 12 of them at Group 1 level.