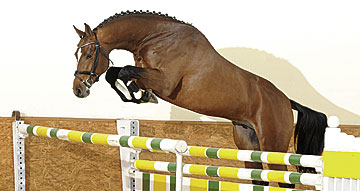 Last Man's Hope's scope and his almost unlimited ability were impressive right from the beginning: He jumped with lightness to the title of OS-International champion stallion in 2009, received top scores at his stallion performance test like a 10.0 for free-jumping, 9.17 for jumping ability and 9.0 each for rideability and constitution. In this way, he also passed his first competitions and achieved wins and high placings in novice and elementary tests for young show jumping horses at the age of four. "This champion stallion's scope appears to be unlimited and his calm approach to all the tests he was subjected to was deeply impressive." - so the comment of the commission judges at his stallion licensing.

Last Man's Hope is already the second champion stallion sired by Last Man Standing. He was decorated as best show jumping stallion at his own stallion licensing in Redefin, finished an excellent 30-day test and even after being in Russia, he was successful up to intermediate level in Germany too. Dam's sire Conteros has won twelve 1.50 m classes and is sired by one of the most successful Holsteiner sires, Contender. Last Man's Hope is descended from the Holstein line 5359. This line is also producer of the licensed stallion Landlord Z and several other successful show jumping horses. The granddam Dorina IV presented also the 1.50 m class winner Sultan by Calido.