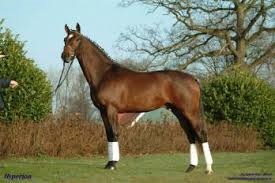 Hyperion is a son of the world's leading sire of event horses, Heraldik xx. Hyperion shows his sire's influence in his blood horse type. His character is "flawless" and he is a sociable, friendly, easy-to-work-with horse. He was licensed in Verden in 2003 and successfully finished the 30-day test at the Landgestuet Warendorf in 2004.

Hyperion's mother, Vis-a-Vis, is a full sister to Viva Voltaire, who was licensed in Verden, then sold to Canada. Vis-a-Vis was sold to Poland, where she has been participating successfully in jumping competitions. He is a 75% sister to Vulkano, who is stationed at the State Stud Warendorf.

Heraldik xx, Hyperion's sire, a black horse born in the Czech Republic, was very popular in Germany. He was moved to Netherlands where he was also a successful stallion, earning Preferent status. His family tree is concentrated with jumping expertise, which he exhibited by winning many championships of "S" classes, leading to the title "Nationalreitpferde. His appearance, character, willingness and rideability made him an exceptional horse.

Hyperion's grandfather, Voltaire, was raised in Germany and based in Netherlands, where he became a very successful stallion, earning the title Preferent. Voltaire competed in international jumping, proving his great power and motivation, which he passed on to his descendants.