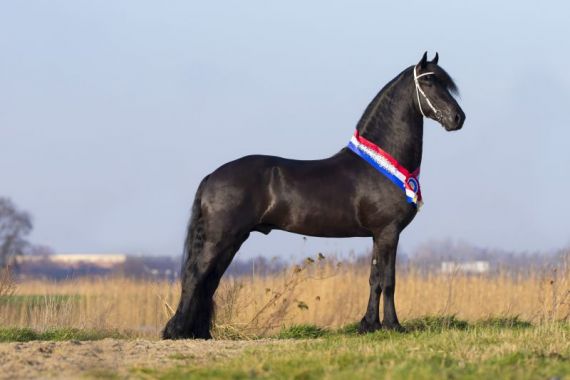 Hette completed the 2013 autumn inspection of the KFPS with much success. Chair of the Ground Jury Bauke de Boer: "After the general inspection under saddle, it became clear that this would be a good year, with Hette proving to be particularly special. The stallion performed exceptionally well across all disciplines, making him the absolute star of the Central Inspection 2013." Hette scored 86 points for dressage under saddle (saddle test), 87 points for dressage in harness (driving test) and 87.5 points for the harness (show-driving) test, with an 8.5 for the use of the foreleg!

Hette is by Norbert 444 out of Tsjikke Z. (v. Rindert 406 ). His grandsire Rindert 406 has high scores on the breeding index of the KFPS, both for exterior and talent. Dam Tsjikke Z is part of the Line 14, dating back to 1907. Horses from this breeding line have been shown to produce offspring with performance-potential, willingness to work and impressive movement. Approved stallions include Karel 370 and Ulke 338. Granddam Jetske B was crowned yearling Champion at the Central Inspection.

Hette is suspected to be a carrier of hydroceaphalus.