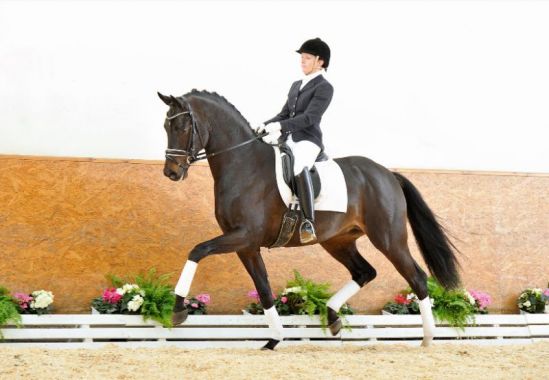 A son of Fuerstenball, Fior is well-built and of the highest quality. This premium stallion of the 2013 Oldenburg licensing in Vechta has great masculine expression and will certainly have a special talent for the big dressage arena. Fior impresses with his type, harmony, and correctness. In all three gaits, he is close to perfect. He walks without effort with great coverage and impulsion, trots with big strides, and shows an uphill canter with engaged hindquarters stepping under the center of gravity. Under saddle, he fulfills the highest expectations and inspires with exemplary rideability and good character.

Fior is a top, modern bred stallion. His sire, Fuerstenball, was licensing champion, stallion performance test winner, as well as the State champion and Bundeschampion. Fuerstenball produced the champion stallion, Follow Me who was sold for the top price (400,000 Euro) at the 2012 Oldenburg Stallion Days in Vechta along with other premium and high priced stallions there.

Fuerstenball consistely produces top foals who are frequently sold for six figures at the German auctions. In 2012, he proved his own talent for sport by achieving high placings at the State Championships, the Bundeschampionships and the World Championships for the 6 year old dressage horses. In 2013, he won advanced (S) level classes and was honored as the VTV Stallion of the Year in Vechta for dressage.

Fior's dam, Supergirl, is the full sister to the approved stallion, Soprano (standing in the USA) and half-sister to the stallions, First Class (Florencio I) and Ronan (Riccione) who is internationally successful in Grand Prix classes with Kristy Oatley-Nist of Australia. Fior's brilliant type is confirmed by his dam's sire, Sandro Hit, who himself was Bundeschampion and the dressage World Champion of the 6 year old dressage horses. Sandro Hit has produced more than 200 state premium mares and approximately the same amount of licensed sons.

In earlier generations, Fior's pedigree contains the genes of the Holstein stallions, Contender and Tin Rocco who strongly influenced Oldenburg breeding and the precious genes of the half-bred Luxury and the legendary Thoroughbred Vollkorn xx.