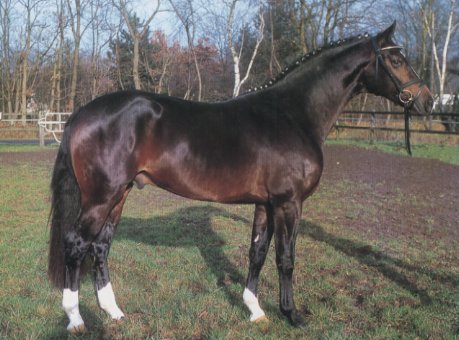 Farewell is a son of the much-praised Federal Champion of 1996, and now "S" dressage winner, Fidermark. Farewell descends from the successful Florestan line and is the first foal out of the Rosenkavalier mare, Riga, who was reserve champion mare at the 1997 elite mare show at Muenster, and has produced two other approved stallions, full brothers to Farewell. The Thoroughbred Angelo xx and Firelight I provide more proven Westphalian performance blood.

Farewell's damline has produced many state stallions and "S" dressage performers, and is the family of Rose Quartz and Wenezia. This beautiful stallion completed his 30-day test with high marks of over 8.5 in both dressage and jumping. Farewell has twice qualified for the Bundeschampionat and is a series winner of dressage tests. Similar in type, frame and movements to his sire, Fidermark, this is a promising young stallion from a strong family who has unlimited potential. His first foals are noted for their good frames and good movements.