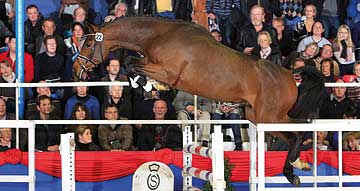 Promising young stallion with his sire's power to jump

Powerful and scopey at the jump, athletic manner – Tailormade Diarado's Boy presents himself as an extraordinary young jumping stallion. Sire Diarado was the celebrated towering 2007 Holsteiner Champion Stallion the world has never seen before. Athletic, modern, a brilliant jumping technique with outstanding intelligence, therefore, he won many tests for young show jumping horses with top scores and became the 2010' bronze medalist at the Bundeschampionat of Five Year-Old Show Jumping Horses. His impressive high score at his 70-day test of 150,57 points confirmed all high expectations of him and placed first in the overall result. He received a perfect 10.0 for free-jumping. With Argentinus, Landadel and Pilot in the maternal line of ancestors there are three millionaires in competition winnings who all produced championship horses. Bundeschampion, World Champion and member of the German dressage team for the Olympic Games Damon Hill is also descended from this line which is used to success.