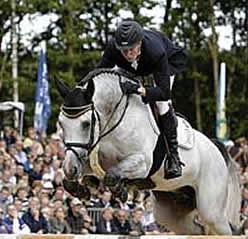 Cornet's Stern was the resplendent Bundeschampion of five year old show jumping horses. It was impossible to miss this exemplary gray at the Bundeschampionat. Cornet's Stern won the final qualifier with a score of 9.0 and he repeated his performance in the final – scoring 9.0 and 9.3 – to win the championship by a clear lead! This outstanding type stallion has already achieved remarkable success in his fledgling career, crowning his countless wins in novice horse show jumping classes with a Bundeschampion title. Cornet's Stern's performance in his 70-day test caused the experts to sit up and take notice. He received the excellent score of 9.75 for scope and 9.5 for technique in the jumping test. Anyone who has seen him jump will understand why. He has an ideal bascule, his reactions are quick as a flash and he has an enormous scopey jump.

Cornet's Stern combines the Olympic genes of his sire, Cornet Obolensky, with the direct dam line of Ludger Beerbaum's European Champion mare Gladdys. Cornet Obolensky's quality is impressively obvious by his many international wins. His maternal grandsire, Pilot, was the youngest horse in Germany to win one million euro in prize money and produced top show jumpers such as World Championship finalist Pialotta and Beerbaum's Priamos. Goldstern is considered to be one of Gotthard's best offpsring, followed by Ramzes AA son Radetzky.