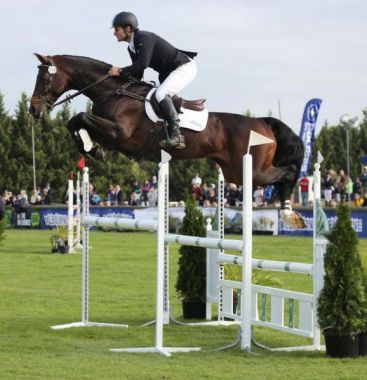 Contenda represents the opportunity for horse breeders to breed to a true dual purpose sire.

Contenda has the rare combination of 3 excellent dressage quality paces combined with a sensational jumping technique with amazing scope and bascule. He is a light, modern, athletic type with proven ability to gallop, and he has correct conformation with a beautiful head as well as a quiet trainable temperament.  But most importantly for the breeder he is a prepotent, highly fertile sire who is passing these traits on to his progeny.

Contenda carries the latest and most highly sought after bloodlines that Germany has to offer. Each generation of his pedigree is filled with outstanding individuals who have gone on to produce the worlds leading show jumping, eventing and dressage horses as well as the next generation of "supersires".

Contenda is the ideal sire for those wanting to produce horses that are not limited to just the dressage or jumping arena but have the talent and quality to succeed at either at the highest level. On this basis, Contenda represents for breeders the ideal sire of the next generation of jumping, hunter jumper, dressage and of course eventing horses.

After extensively searching Germany, Sweden, France and the UK for the right stallion to import to Australia, Contenda was purchased from 4th generation horse breeder Heinrich Tamm of Cuxhafen, Germany.  Contenda was then broken in and lightly schooled by Henrich Gabel of Nesselroden, Germany, before being imported to Australia in June 2005, where his next 18 months were spent under the watchful eye of David and Amanda Shoobridge of Revelwood Warmblood Stud. During this period he was the winner at his first young horse dressage outing amongst a very strong field of competitors, scoring straight 8's in the first round and high 70's in the second round. This success was shortly followed by Contenda being named Premium colt at his AWHA stallion licensing, including topping the jumping rankings by scoring 9's for his free jumping technique.

Contenda's first season at stud was in 2005/06 with his first foals being born in 2006/07. Contenda has displayed excellent fertility with outstanding semen quality both fresh, chilled and frozen. Contenda's foals to date are nothing short of impressive. This was confirmed when a Contenda foal from his first crop, Kitara Top Contenda, presented at the 2007 ACE classification tour was awarded Premium status and named a Stallion Prospect. In the 2009 ACE assessment tour a Contenda colt was named the highest scoring yearling in Australia, whilst another Contenda foal was ranked in the top 10 scoring colts in Australia. This colt went on to be approved as a breeding stallion in 2013.In the 2014 warmblood horse assessments, all Contenda foals assessed were awarded Elite status with a Contenda gelding being the highest scoring yearling Australia wide. Contenda crosses very well over a wide range of mares, especially thoroughbred mares. Contenda's foals typically have suspended elastic movements, beautiful heads, friendly trainable temperaments, a natural talent for jumping and are outstanding types.

2012/13 saw Contenda's frst crop of foals enter the competition arena under saddle. He has presented winning progeny at the highest age appropriate level in the show jumping, dressage, hunter hack, showing and eventing arena's.  Undoubtably, the number of Contenda progeny in the winners circles will swell greatly in the next few years as each years foalcrop matures to competition age.

As a sire, Contenda has been attracting some of Australia's, and the world's, elite riders and mares. To date Olympic medal winners, Australian representative riders, and owners of Elite level mares have all chosen to breed to Contenda. In 2017, a son named Swiper was purchased  for high sums by the Japanese Olympic Federation and Swiper will be representing Japan at the 2020 Tokyo Olympic games, as well as, competing on the European Eventing Circuit.

Contenda has been an outstanding all-round competitor with wins in open dressage, show jumping and eventing. In the 2014 season Contenda is competing at 2* eventing with Shane Rose where he has had many winnings and placings.

In January 2007 Contenda joined the stable of former Australian Olympic Showjump Competitor and 2006 Australian WEG showjumping rider, Rod Brown, of Kulnara NSW. Rod planned to campaign Contenda initially in the young horse showjumping classes, before bring him on through the grades. Unfortunately due to the EI outbreak and lockdown in 2007/08 Contenda ended up being "locked down" at stud for almost 12 months, thus not being able to prove himself as a young competition horse during this time.

In February 2008, Contenda completed the ridden and showjumping components of his stallion lisencing to become a fully licensed stallion with the ACE group. Contenda scored 9's for his jumping technique and scope and 8.5's for his ridability and performance under saddle. German assessor, Gerd Kunst, after seeing Contenda jumping commented that he would like to take Contenda back to Germany with him!

In December 2009 Contenda  moved to the stables of Christopher Burton of Redleaf Lodge, Wilberforce. Christopher is a very talented rider with the recent highlights of winning Aachen 4* eventins in 2012 and 2013 and being selected to represent Australia  in eventing at the 2010 Kentucky WEG and in the 2012 London Olympic Games.  Over the 18 months that Christopher and Contenda worked together they were an immensely succesful combination with countless placings.  Out of 13 competition appearances in either showjumping or eventing the pair were awarded eight first places, three second places, one third and one fourth placing. Christopher competed Contenda up to 1.35m in showjumping and Pre Novice eventing.

In eventing, Contenda has shown a huge talent for all three phases. Contenda consistently scores above 70% in the dressage phase, a clear round in the show jumping phase can always be expected and he shows speed, endurance and bravery in the cross country phase with his large  groundcovering stride and powerful jump.

Olympic Silver Medalist and Contenda's trainer, Shane Rose gave an interview after completing the cross country round at Melbourne 2013 Three Day Event on Contenda and said the following, "....he certainly has got the ability to go as far as he needs to go for 4* and beyond, he has super super jumping ability, he is great on the flat and he appears to gallop great....he just gallops and jumps and doesn't get tired near the end of the course"

Contenda is also consistently winning and placing in straight show jumping classes up to 1.35m amongst large quality fields. Contenda's scope and outstanding technique over a fence never goes unnoticed.  His jumping abilty is the quality of a world cup show jumper with many international showjumping judges approaching his rider and commenting that he could be a straight showjumper at the highest level.

Contenda has been awarded the Merit Award, Bronze Medallion, Silver Medallion and the highest possible award the Gold Medallion for performance by the AWHA after only 15 months of competition. This is testimony to his impressive and consistent performance record.

From July 2011, Silver Olympic Eventing Medal winner Shane Rose took over the ride on Contenda. After allowing some time for the new partnership to form, Shane and Contenda stepped up to 1* eventing. Contenda and Shane proceeded to win all their starts that season in 1* eventing  from large quality fields of seasoned horses and riders.  Due to injury Contenda was forced to spend 2012 resting at his home in Arcadia. After 12 months off he has made a full recovery and returned to the competition arena.

Contenda's sire Contendro is cementing himself in breeding history as a highly sought after sire of both quality dressage and jumping horses. Contendro's progeny are highly sought after and are bringing well above average prices. At the 2007 Spring Elite Auction at Verden, Germany, the top price horse was a licensed Contendro son, Carlucci, who set a new record price of 280 000 Euro ( Approx.AUD $450 000). His progeny can be seen excelling in both the dressage and jumping arena as well as the breeding barn with 12 colts (including Contenda) being approved for breeding from his first colt crop to come of age.  Contendro I is also the sire of Andrew Hoys's 4* eventer Cheeky Calimbo and Mark Todd's Bronze Olympic Medal winning horse, Campino.

Contendro received Premium status at the 1999 stallion approval in Verden, and then went on to be sovereign winner of the 100 day stallion performance test in Adelheidsdorf. Where he received the highest scores in all indices and was the absolute best in jumping. In 2001, he was placed amongst the best at the Holstein Reitpferdchampionat and was nominated for the Bundeschampionat for German Riding horses.

Bolero, a classic foundation stallion in the Hanoverian Studbook producing  47 licensed sons including Brentano II, along with other top stallions Bismarck, Brentano I and licensing winner ,Buenos Aires. He has sired 317 registered broodmares, of whom 96 were awarded state premium status. Bolero has sired 3 winners of the 3 year old Riding horse Class at the Bundeschampionate, Boruschkin,Bini Bo and Bocaccio – all of whom went on to advanced level dressage. Three of Bolero's descendants medalled at the 2004 Athens Olympics – Beauvalais, Bonaparte and Brentina. Bolero's son, Beltain, is the sire of the Champion six year old horse at the 2005 Bundeschamionate, Bellissimo. The highly successful Grand Prix dressage stallion, Don Bolero, ridden by Kirsty Oatley-Nist is out of a Bolero mother, and is one of most successful Australian -owned horses ever with scores around 70% at major European competitions.

Bolero's dramatic influence is made all the more remarkable by the fact that he died at 12 years old form a heart attack, when German breeders were just beginning to appreciate the potential he had as a sire. Bolero passed on his nobile attitude, type and excellent conformation and rhythmic gaits, producing outstanding elegant dressage horses. Today Bolero is recognised as  a wonderful sire of broodmares.

Bolero is by the elegant English Thoroughbred, Black Sky, who produced very rideable dressage horses. Black Sky's grand sire Djebe was a son of Djebel, sire of the great stakes winning sire, My Babu, who when exported to the USA established a winning line of hunter/jumpers. In Australia the My Babu son, Better Boy has been an influential sire of jumping horses. Bolero's dam, Baroness, in by another English Thoroughbred and traces back to Hyperion. Her dam's sire Athos was regarded as a good sire of dressage broodmares. 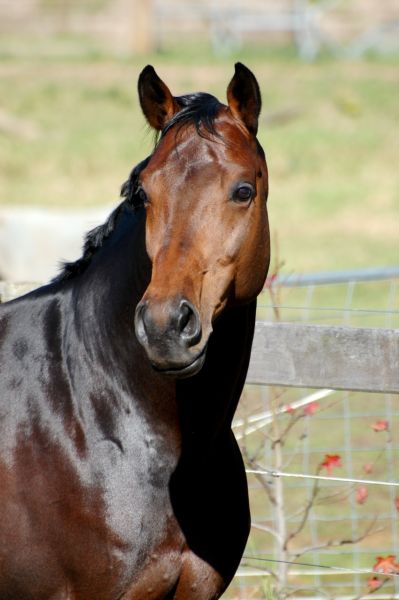 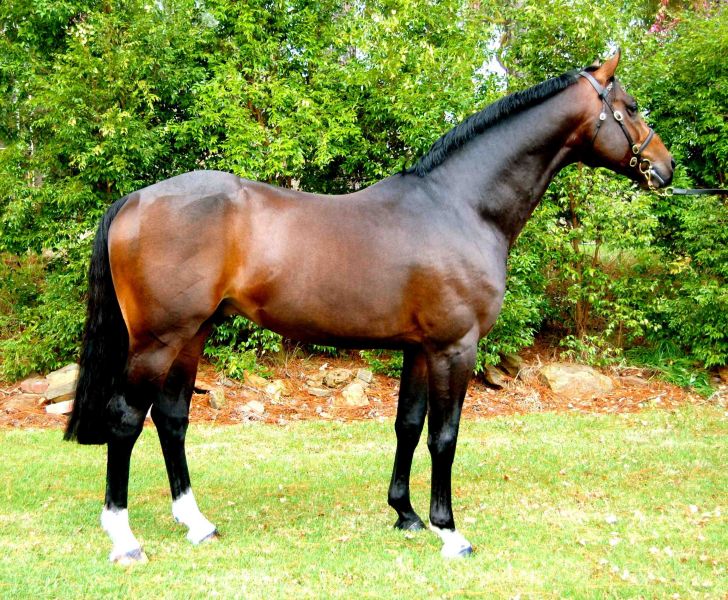 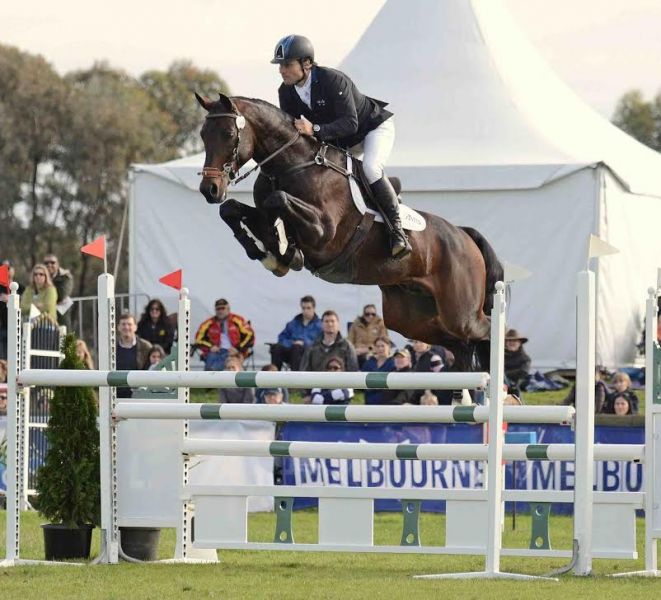 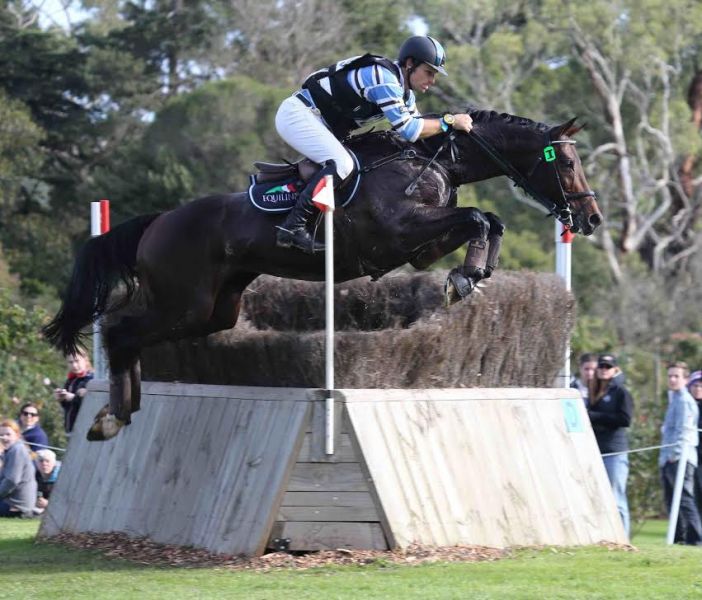 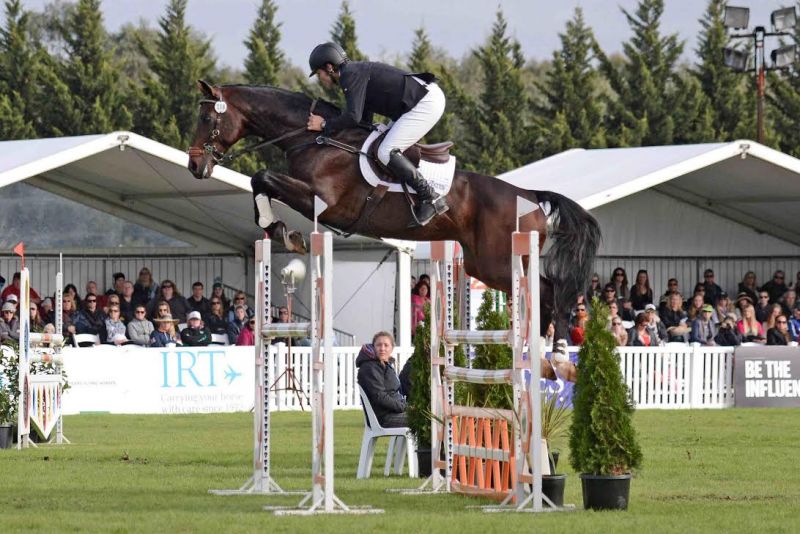 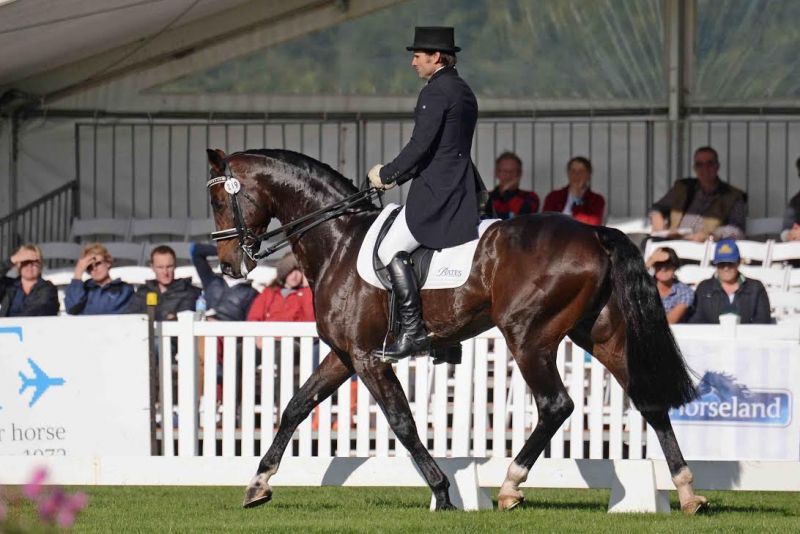 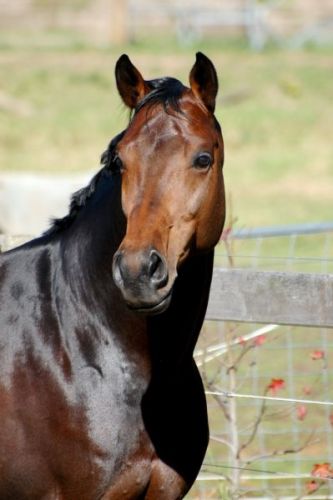 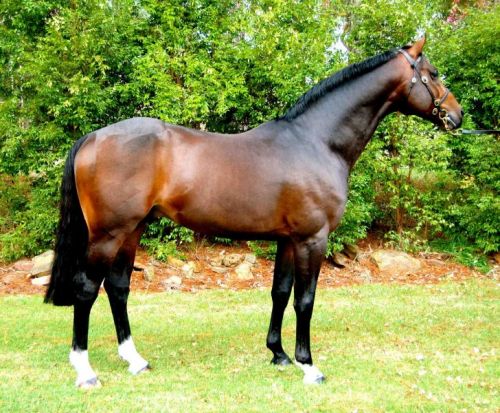 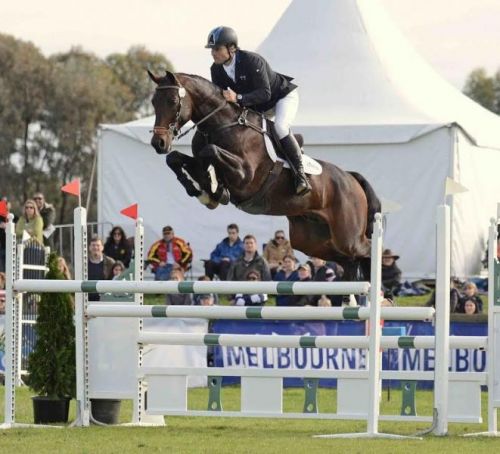 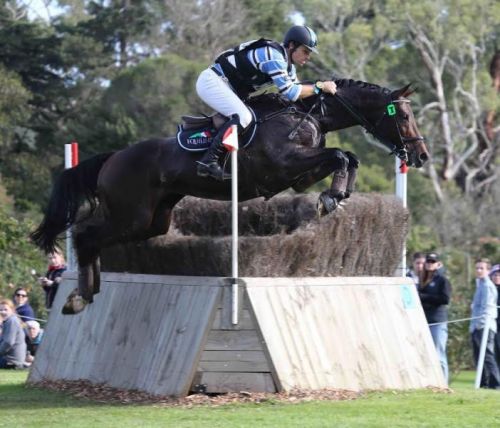 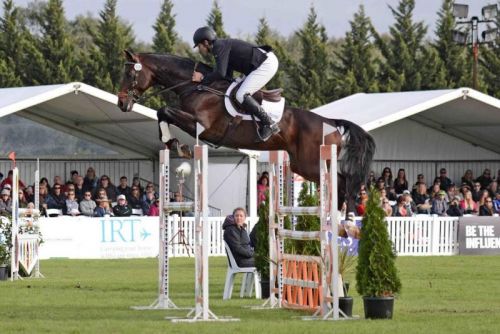 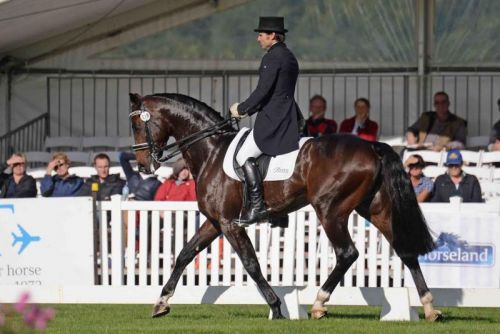