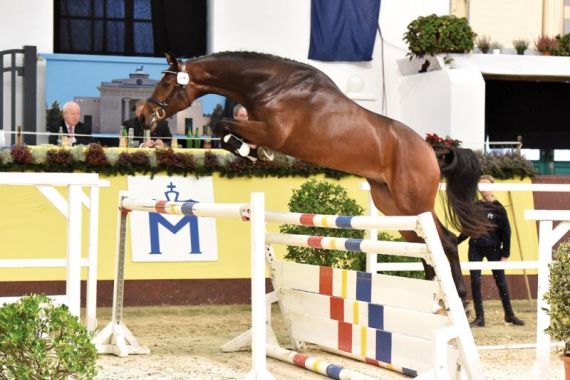 2014 Champion Jumper Stallion at the Mecklenburg Licensing in Redefin

At his licensing, he presented himself as a great all-rounder, equipped with a top modern style, three outstanding paces and exceptional ability at the jump.

His sire, Contendro I, who was champion of his stallion performance test, claimed fame as a foundation stallion at an early age with more than 60 licensed sons of which Codex One (internationally successful with Christian Ahlmann) and Carlucci deserve a special mention. In 2005, his daughter Con Pleasure became OS champion mare in Vechta.

Conbassy's dam is a full-sister to the licensed stallion, Emporio Armani. Her sire, Embassy I, won the Youngster Cup at the Wiesbaden Pfingsturnier in 2002. In 2002 and 2003, he was a successful participant at the show jumping Bundeschampionship in Warendorf. Twelve sons have been licensed so far.

Don Juan in the third generation was full brother to Dixato, the successful Nations Cups champion with Marion Henkel. He has established himself in the grand firmament of Hanoverian show jumping producers having sired top horses such as Genesis ridden by Tina Cassan, Dulf ridden by Lesley Mc Naught and Jos Lansink, Delon VA ridden by Lars Nieberg and many more. Further down the generations we have Pik König, Abhang III and Weiler, absolute classic sires who have each produced performance horses for the big courses.