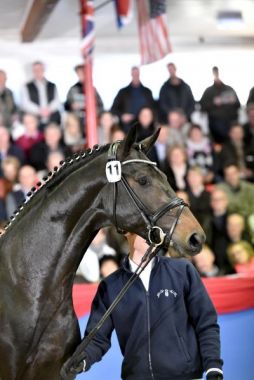 This gorgeous colt became the 2015 acclaimed second reserve champion of the OS licensing in Vechta. Comfort convinced the inspection committee and the spectators. He always got along very well with the distances of the free jumping series and performed outstandingly on all three days of the licensing.

His sire, Christian, debuted at seven years old at the advanced level,achievingl internationalsuccessx and now continues his unblemished career under Sören von Rönne. In 2012 he achived  with the highest scores in the Bundeschampionat finals for six year old jumpers. After the class for five year olds he was under Gilbert Böckmann aft 2011th In its HLP 2009 Christian received the maximum score of 10.0 for his jumping. Comfort is the second son of Christian to be licensed.

From the dam Avienna came two approved stallions: Caicos (Calido I.), Who at his stallion performance test in 2013 Schlieckau a 9.0 for his free jumping and scored successes in show jumping, ability competitions. Her son Gabbiano (v Grandeur.) is placed at the Bundeschampionat and posted successes under young Leonie Böckmann to S **  jumping level. Avienna also produced the M-jumping Guiness (v. Grandeur).

The dam's sire Last Liberty comes from the full sister of the World Cup winner Aramis under Mario Deslauris / CAN and the licensed and also placed in show jumping stallion Armani.

The granddam produced Grandeur Avion Noir (v. Grandeur), placed in show jumping Bundeschampionats and the World Championships for young show jumpers in 2009 and 2010.