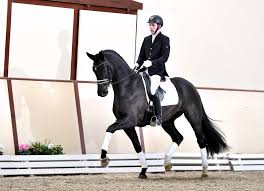 Charming Ferro is the new discovery of the 2015 Oldenburg Stallion Days. He is strong in type, large-framed and has extraordinary movement. His walk and canter also fulfill the highest demands.

In 2011, his sire, Charmeur, was the most popular stallion of the Netherlands. In 2012, he won the Pavo-Cup final, was placed at the World Young Dressage Horse Championships in Verden and is now successful up to Intermédiaire I.

In 2009, his dam Sweetie W produced the Reserve-Champion of the KWPN licensing in s'Hertogenbosch, Beau (by Lingh). His dam's sire Ferro/Coby van Baalen/NED can be seen as one of the most successful dressage stallions in sport of all time, having won the Silver Medal at the Olympic Games, as well as World Equestrian Games and European Championships. Havidoff, successful up to Grand Prix, and himself descending from the Grand Prix stallion, Clavecimbel, follows in the third generation.

Many of his offspring are and were successful at Grand Prix level, which also applies to the Trakehner Doruto in the following generation, who sired in the Netherlands and produced several Olympic horses there.