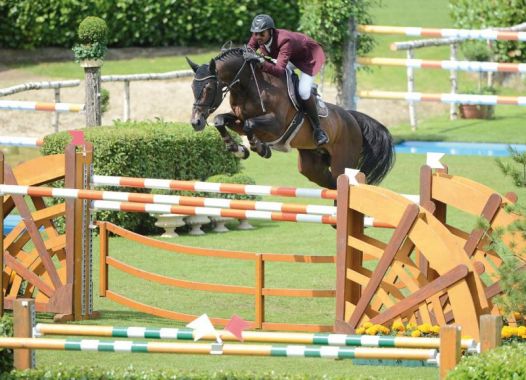 After a long career in international show jumping, the Holstein stallion, Casanova, now stands at stud.

Alexandra Heinzmann brought him up to advanced level/S level, and he then continued his career in international show jumping with Christina Liebherr (SUI), Mubarak Yousuf A S Al Rumaihi and Ali Bin Khalid Al Thani (QAT). In 2012, he was second in the Grand Prix of s'Hertogenbosch and achieved a high placing at CHIO Aachen. In 2014, he won the Dubai Grand Prix and qualified for the World Cup finals in Lyon (FRA). From a breeding perspective, he is at the start of his career, and yet in two sample coverings from the year 2002 he has already produced two successful show jumpers.

His sire, Cadillac, one of the few sons of the very valuable Caletto II and closely related to the once in a century producer, Capitol I, was ridden successfully at advanced level/S level show jumping by Peter Wetzel. He is classified as a positive sire for show jumping because many of his progeny have managed the step into the advanced class/S level class.