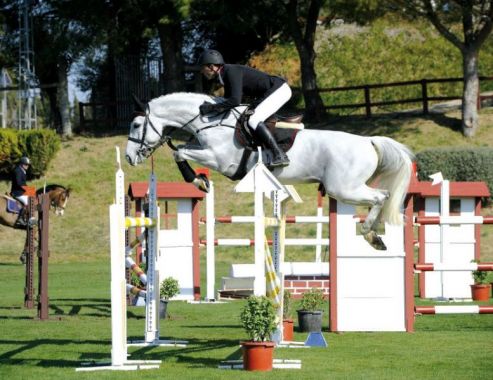 Bred from a unique combination, this course specialist is wonderfully shaped and equipped with an excellent canter, super-quick reflexes and plenty of scope. Caligula has caused a stir internationally: in the last few years, he was very successful with Oleg Krasyuk (UKR) on the World Cup and Grand Prix courses. In 2015, he will stand at stud for the first time.

His sire, Cornet Obolensky, bred in Belgium with a great deal of Holstein blood, is already seen as one of the best show jumping producers of our time. So far, he has produced 233 show jumpers at advanced /S level with a descendants lifetime earnings sum of more than 3.69m Euros. He has sired 67 licensed sons, amongst them the champion stallions at the NRW licensing, Cornado I and Coronas, as well as the champion stallion at the 2007 Hanoverian licensing, Cosinhus.  In his first foal crop, he produced Cornet´s Stern, winner of the Bundeschampionship 2008 and Conte Bellini, vice-champion at the Bundeschampionship of five year old show jumpers.  Both are licensed stallions.

In addition, Cornet Obolensky was very successful internationally at Grand Prix including having taken part in the 2008 Olympic Games in Hong Kong ridden by Marco Kutscher.

Caligula's dam, Lollypop was successful in sport for many years and was the dam of more sport horses. Her sire, Lord Calando, was used in several different European countries, and was a half-brother of the Olympic stallion Carthago ridden by Jos Lansink, and sire of 7 licensed stallions as well as 43 advanced level/S level sport horses. In the third and fourth generations, we see Pilot and Direx, two Westphalian performance sires who were combined frequently. Pilot was a great producer of show jumpers, a virtual icon of Westphalian performance breeding. His breeding influence reaches far across Westphalian borders. Almost all German and international warm blood breeding has used his genetic material.