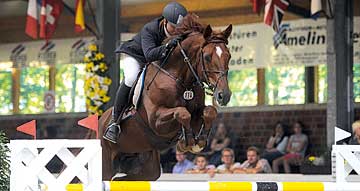 Bred for high performance and with distinct blood ties to the millionaire sire, Galoubet A, and Pilot, Billy King is a top class modern sire. After seven victories at M Level, he immediately proceeded to win at S Level under Valentin Valkov, and has been successful internationally up through Nations Cup competitions.

His sire, Baloubet du Rouet, won the World Cup Final three times in a row, was a 2004 Olympic gold medalist, and helped to bring home the Team Bronze in 2000. The WBFSH ranks him second in the world on the list of top jumping sires. In the meantime, he can look at an entire armada of internationally successful offspring like Chaman who was the winner of the 2011 Riders Tour under Ludgar Beerbaum.

Billy King's damsire, Quilot, was successful himself at S Level in jumping, and stems from Meredith Michaels-Beerbaum's triumphant stallion, Quick Star, who in turn is also sired by Baloubet's sire, Galoubet A. Quick Star's offspring have earned over one million Euro in show jumping.