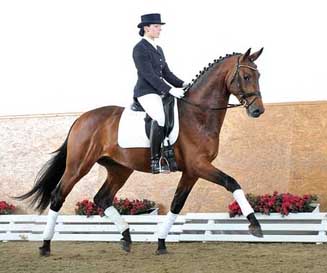 Barroso is a refined young stallion with an out-crossed pedigree. Extraordinary brilliance in type is combined with excellent lines and correct conformation. He has three first class gaits swinging in rhythm over the back which promises the highest riding comfort.

Barroso's sire, Bordeaux was the 2009 Champion of the KWPN Licensing and the winner of the 2009 stallion performance test in Ermelo. In 2012, he was 4th in the finals of the World Championships of the Young Dressage Horses in Verden, Germany ridden by Eva Moeller. In the following winter of 2012/13, Bordeaux qualified for the national finals in s'Hertogenbosch with clear victories at stallion shows in the Netherlands. At the finals, he was classified as the top favorite, und is currently the most successful dressage stallion of his class in the Netherlands.

Barroso combines international dressage greats like Krack C, Parout, Gribaldi, and Donnerhall. In addition, he stems from the first class Westphalian foundation line of Dodona, from the breeding farm de Baey, out of which the stallions Rubinstein I and II, Royal Angelo I and II, as well as international dressage stars such as Ahlerich II ridden by Dr. Reiner Klimke, Amon ridden by Annemarie Sanders-Keyzer, and Rembrandt ridden by Nicole Uphoff emanate. Barroso's dam, Kendy, a daughter of the meaningful Thoroughbred, Saros xx, has already produced the Grand Prix successful horses, Shadow (Domorcraat), and Up To You (Gribaldi).

After being briefly in Rhineland, this bloodline, which represents the famous Schlenderhaner black gold family, moved to the Netherlands where it delightedly continued to be held in high esteem, and produced the licensed stallions Belisar, Karosso, Erato, Gatecrasher xx, Jolly Jumper, Midi Noir and Jonas.

Barroso: A refining gem for the highest demands!