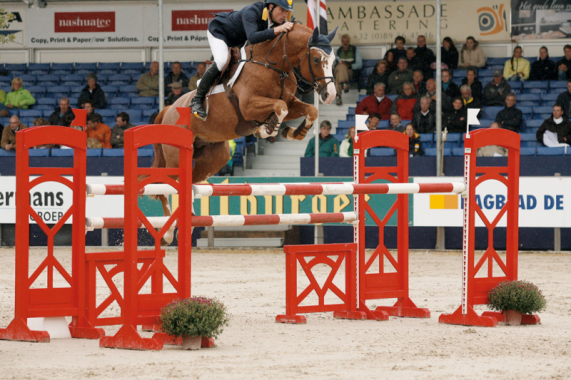 Gold and bronze at the European Junior and Young Riders Championships.

Atlantus has a winning instinct. He shot to stardom at the German Young Riders Championships where he and his rider Andreas Kreuzer won the individual bronze medal. Then he topped this already impressive achievement with a team gold and another individual bronze at the European Championships. Andreas and Atlantus were placed among the top five in the Spangenberg Grand Prix and leading prize winners in the Grand Prix classes at Vejer de la Frontera, Ising and Lanaken. As a seven-year-old, Atlantus made it to the final of the World Championship for Show Jumping Horses in Lanaken. As a six-year-old, he competed successfully at CSI Moorsele and, as an eight-year-old, at CSI Wiesbaden.

Atlantus's sire, Quickfeuer van Koekshof, unites outstanding Holstein show jumping bloodlines such as that of Nimmerdor by Farn with two of the most famous Hanoverian stallions, Gotthard and Weingau. Quickfeuer has produced numerous internationally successful show jumpers such as Wonder vd Roshoeve/Douglas Duffins, Wangaro/Malin Bayard, Ultra Fox/Nick Dekkers and Unica vd Roshoeve/Angela Lawrence. His dam, Zolanda, is the Thoroughbred-type daughter of President, a stallion by Tumbled xx, who has obviously also inherited the genes of her Thoroughbred great-grandsire Talisman xx. The dam's line also includes licensed stallions Handel by Wolfgang and Numberto. Atlantus is an outstanding athlete with a very positive disposition.